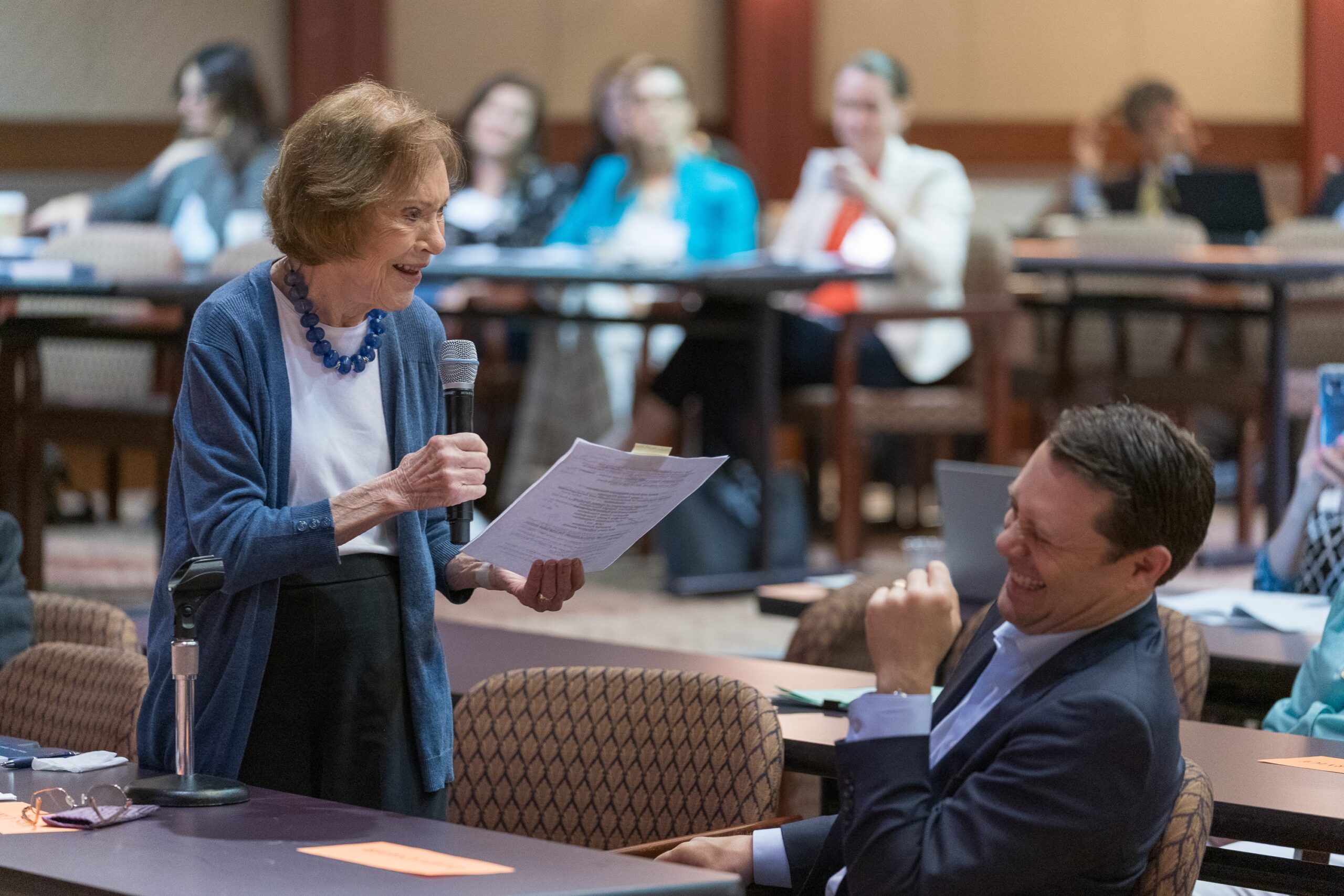 ATLANTA (May 24, 2021) — Former U.S. First Lady Rosalynn Carter was recognized today by the World Health Organization (WHO) for 50 years of leadership to help improve access to health care for all people with mental health and substance use issues.

During a virtual ceremony at the opening of the 74th World Health Assembly, WHO Director-General, Dr. Tedros Adhanom Ghebreyesus presented Mrs. Carter with an Award for Global Health in recognition of her contributions to advancing global health. Rosalynn Carter was one of three recipients honored with this award during the opening remarks today.

[Learn about Rosalynn Carter’s 50 years of mental health advocacy in the U.S. and globally]

In a pre-recorded video, Carter Center Board of Trustees Chairperson Jason J. Carter, grandson to Jimmy and Rosalynn Carter, read a letter from Mrs. Carter and accepted the award on her behalf.

“I’ll note that when she spoke to the Medical Society of the WHO in May of 1979, she become the first sitting first lady of the United States to address the members of the WHO,” Carter said. “It was a groundbreaking event as a first lady and groundbreaking for mental health, because on that day she stated that health is a human right and that you cannot have true health without recognizing mental health as a crucial component.”

In a letter that Jason Carter read from Rosalynn Carter, she said:

“The Director-General’s award for global health is especially meaningful to me in light of the Carter Center’s long partnership with WHO to eradicate debilitating neglected tropical diseases and to promote the inclusion of mental health as an integral part of overall well-being. My hope is that this is the moment when all nations will make behavioral health a priority and create quality systems of care that are equitably delivered. I’ve been waiting a long time to see this happen. I urge all of you attending to use your influence and talent to ensure that it does.”

View Jason Carter’s remarks and letter read on behalf of Rosalynn Carter here, and view the full WHO award ceremony here and here.

The award came on the heels of The Carter Center Mental Health program’s 25th annual Rosalynn Carter Georgia Mental Health Forum on May 20 and 21, 2021, held virtually for the first time since its 1995 inception.

Action was a theme throughout the forum, which featured a series of conversations with top experts and people with lived experience on a vision for transforming mental health and substance use care, mental health for all, housing innovations in Georgia, prevention and early intervention and guardianship in Georgia.